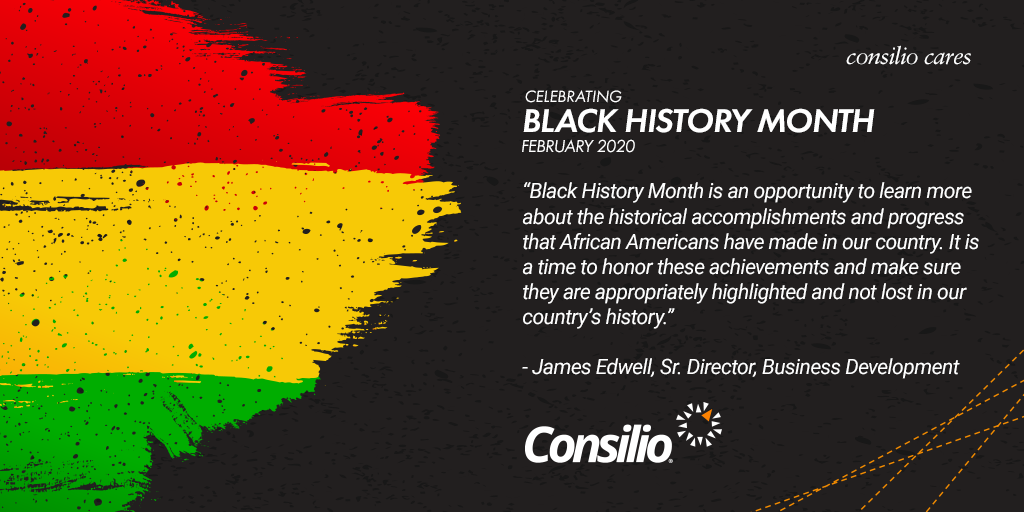 This blog is part of our Black History Month series.

James Edwell is a Senior Director of Business Development located in Pittsburgh. While he has been working in the industry for over 15 years, James is with Consilio as a result of several acquisitions and has a combined service time of 13 years. James earned his Bachelor of Science in Legal Studies from Point Park University in Pittsburgh. To James, Black History Month is an opportunity to learn more about the historical accomplishments and progress that African Americans have made in our country. It is a time to honor these achievements and make sure they are appropriately highlighted and not lost in our country’s history.

Is there anyone who specifically stands out to you in black history?

Not to seem trite, but I’ve always been a fan and enamored by the life of Martin Luther King, Jr. Even as I learn more about other contributors and participants, no one has made an impact on me and my thought processes in my daily life more than Martin Luther King Jr.

If you could go back to a monumental moment in black history, what would it be and why?

I would go back to April 3rd, 1968; the day before Dr. King was assassinated when he preached the deliberative sermon, „I’ve Been to the Mountaintop.“ I’m struck by the prophetic account, and I would like to know what being there was like. It would be interesting to experience the electricity in the room from that fateful proclamation. But at the same time, I wonder if everybody saw it as an encouragement or if there was a feeling of foreshadowing.  Was there excitement or fear or a combination of both? His words were so powerful. I just would have loved to hear such a proclamation in person.

What verbal legacy/piece of advice would you leave for those who come after you in your current position at Consilio?

I would say, don’t lose yourself. I have worked with colleagues who have struggled to make it in sales, and sometimes I see people try to become somebody that they aren’t in an effort to succeed, and the desperation to make a sale starts to leak out. Stay true to the process of relationship-building and then manage the relationships that you build both internally and externally. Allow the process to take care of itself.  Stay true to yourself and the person that you’re proud of being.

What is something important you feel like you’ve learned at Consilio?

I have come to Consilio in the last 14 or 16 months as a result of the DiscoverReady acquisition. DR was a much smaller company, which meant that we had people who had multiple roles with the ability to perform many different functions. As the roles are more distinct here, one thing I have learned from Consilio is the art of collaboration within a large organization. I have many opportunities to work with really bright people, which I guess is also one of our True North values. I’ve really learned a lot about collaboration since the acquisition.